Photo Above:
A deal between Kansas’ David McCormack and Legacy Restaurant Group, operators of 52 Wendy’s, was set up by Learfield’s new Allied program.COURTESY OF LEGACY RESTAURANT GROUP

David McCormack’s pterodactyl-like wingspan and Adonis frame stretch from one side of the Wendy’s restaurant to the other. The center on Kansas’ national championship-winning basketball team was a complementary piece on the Jayhawks’ stacked roster this past season, but in the world of name, image and likeness, McCormack is a star whose storefront poster draws customers to Wendy’s locations throughout eastern Kansas.

As NIL turns 1 on July 1, perhaps the single-greatest development has been the use of school marks in tandem with brands and athletes in marketing campaigns like the Wendy’s deal with KU, brokered by Learfield’s new Allied initiative.

“The operating model of the future has to have a structure in place to maximize the value for all of the stakeholders — student athletes, brands and universities,” Learfield CEO and President Cole Gahagan said. “It’s a top priority for us and a conversation we’re having everywhere the schools have approved it.”

A handful of recent deals executed by Learfield exhibit how the media and tech giant views the future of the collegiate multimedia rights space, which in the past has been dominated by radio advertising, corporate sponsorships and signage. Those assets aren’t going away, but deals involving the athletes will become just as much of a foundational asset for the company.

Learfield still represents the schools — 160 of them — for their media and marketing needs, including blue-chip brands such as Ohio State, Oklahoma and Texas. But the more Learfield can facilitate athletes into these deals, the more value it can unlock using the combination of athletes, brands and university marks, Gahagan said. While Learfield can get the athletes to the table, it is still up to the athlete and the brand to execute the terms.

Brands can spend from the hundreds of dollars up to five figures for most NIL deals with athletes, depending on their social media influence. University IP and sponsorship deals can range from five figures into the six figures, based on the assets involved and the size of the school.

Legacy Restaurant Group in Kansas is one of the Jayhawks’ newer sponsors and one of the biggest Wendy’s franchisees in the country, owning and managing 52 stores. LRG, through an NIL deal with McCormack, made him a valuable and visible brand ambassador.

The Wendy’s stores needed a counterpunch to rival Whataburger’s association with Kansas City Chiefs star quarterback Patrick Mahomes, who has pledged his stomach’s love for that brand.

Not a single Jayhawk could match Mahomes’ star quality, but several of them, plus KU’s marks and a sponsorship arrangement with men’s basketball coach Bill Self, made a formidable marketing front. LRG turned on the passion of Jayhawks Nation with a sponsorship deal through Learfield that tied the Wendy’s brand to KU’s late-night, season-opening practice — “Late Night at the Phog” — along with the Self deal.

LRG has surged from 14 Wendy’s to 52 in the past few years despite the pandemic.

It was through that association that Learfield also worked with Legacy to identify opportunities with basketball players, facilitating deals with seven Jayhawks in all, including McCormack.

The deal between Learfield and Legacy requires one contract. Legacy’s deals with seven KU athletes require seven contracts, which is why many brands have found navigating the NIL landscape an often-clunky process.

Determining value in this new and fragmented space can be tricky and laborious, but more and more solutions are being found in this three-legged equation: Athlete plus brand plus school marks.

“The three elements we had to have were IP rights, Coach Self and NIL partnerships with the players,” LRG President and CEO Felix Tollinche said. “They even wear the Wendy’s gear we gave them around campus.”

Tollinche admittedly was concerned about how recognizable the players would be, but any doubts were erased when he saw fans engage with the athletes at an in-store event. 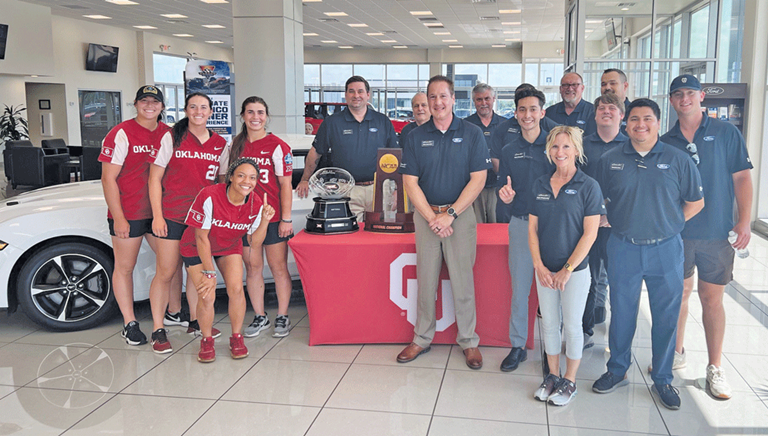 Winning on and off the diamond

Oklahoma’s national championship softball squad provided another example of how the fans’ affinity for athletes can enhance a marketing initiative.

San Antonio-based Cavender Auto Group, a stalwart business in Texas with more than a dozen dealerships, moved into Oklahoma in May with the acquisition of two Ford dealerships in Oklahoma City and Norman.

Over the course of the past month, Cavender’s marketing team pondered how best to introduce itself — an 80-year-old Texas business — to the people of Oklahoma.

It entered into talks with Learfield, which represents Oklahoma’s multimedia rights. As talks of a corporate sponsorship progressed earlier this month, the dominant Sooners softball team captured the Women’s College World Series title and their immense popularity around Norman became more apparent.

Learfield’s sales team in Norman suggested that Cavender include appearances by OU’s softball team at the dealerships as a way to draw in customers for autographs, photos and social media content. OU softball appearances helped close the deal with Cavender.

The dealership in Norman hosted its first OU softball appearance on June 18 and the players showed up in their full uniform, which added to the spectacle.

NIL transactions for OU’s female athletes were outpacing the number of deals for male athletes as of a week ago.

Express, a clothing brand based in Columbus took a different route to its NIL deals and Ohio State sponsorship. The brand did its deal with two Buckeyes football players first, signing quarterback C.J. Stroud and receiver Jaxon Smith-Njigba two months ago and only recently building on it with an Ohio State sponsorship.

When Express signed Stroud and Smith-Njigba, a press release announcing them as Express’ first athlete endorsers had to be careful not to mention Ohio State because the brand did not own the rights to the Buckeyes’ IP. Instead, Express referred to them as Columbus collegiate football players and they were dressed in jackets and jeans.

Since then, Express has secured IP rights to the university via Learfield’s local sales organization in Columbus. Express will now be able to include Ohio State marks on its marketing materials and go inside the Horseshoe for photo shoots, adding a layer of authenticity to its planning.

“We chose Jaxon and C.J. to share their perspective on how personal style contributes to their confidence,” Express CMO Sara Tervo said in an email exchange with Sports Business Journal. “The goal with this partnership is to create and share contact that showcases our men’s assortment. While they look great in their OSU gear, it is their approach to off-the-field fashion we are going after.”

As it became evident over the last half of 2021 that university IP would become vital to athlete marketing, Learfield tried to position itself with a new program called Allied, which was announced in December.

Until then, standard procedure called for a separation of church and state. College athletes would conduct their own commercial activity, but they could not show up in their team gear unless the sponsoring company paid for the rights to use the school marks. That made for a pretty limited selection of potential partners for the athletes.

Learfield Allied set out to be the first program that made it easier for brands to find marketing opportunities with athletes and university IP.

Still, schools were reluctant to get involved with player deals because of liability concerns. If an athlete deal goes wrong, will the school be responsible?

That’s changing. Most schools believe in getting more involved in athlete marketing, not less.

“They’ve basically opened up IP rights opportunities for student athletes and corporations to come together,” Ohio State AD Gene Smith said. “Athletes in the NIL space cannot use our logo or other trademark assets without that. What that does is enhance the opportunities all the way around.”

“The goal of Allied is to increase support for student athletes, increase their opportunities and protect the school’s IP rights,” he said. “We’ve been connecting brands with school IP rights for 50 years and now they want that connection amplified with the student athletes. It’s going to be a foundational asset, just as we view digital, TV, radio and video boards.”

Learfield subsequently has launched Allied+, a new program that places a sales executive on each campus that opts in, like Oklahoma and Ohio State. Those new positions, which are being filled by Learfield, specifically will be assigned to find NIL opportunities for athletes and brands.

Oklahoma’s Allied+ was filled by former OU running back Rodney Anderson, who has already identified two potential NIL deals for the Sooners.

This is the direction NIL is headed in Year 2 — more deals that bring university IP and athletes together as stakeholders in the marketplace look to unlock the value of these arrangements.

“It’s interesting,” OSU’s Smith said. “The original working group that studied NIL went down the path of more school involvement at the very beginning. And we walked away from that approach when we should have embraced it. Now we’ve got to go back and find what it means; do you have more school involvement? The marketing and media rights holders should have more flexibility with our student athletes. We just have to figure out what that means. Can we set up deals without actually negotiating them? Those are the types of questions we need to answer.”