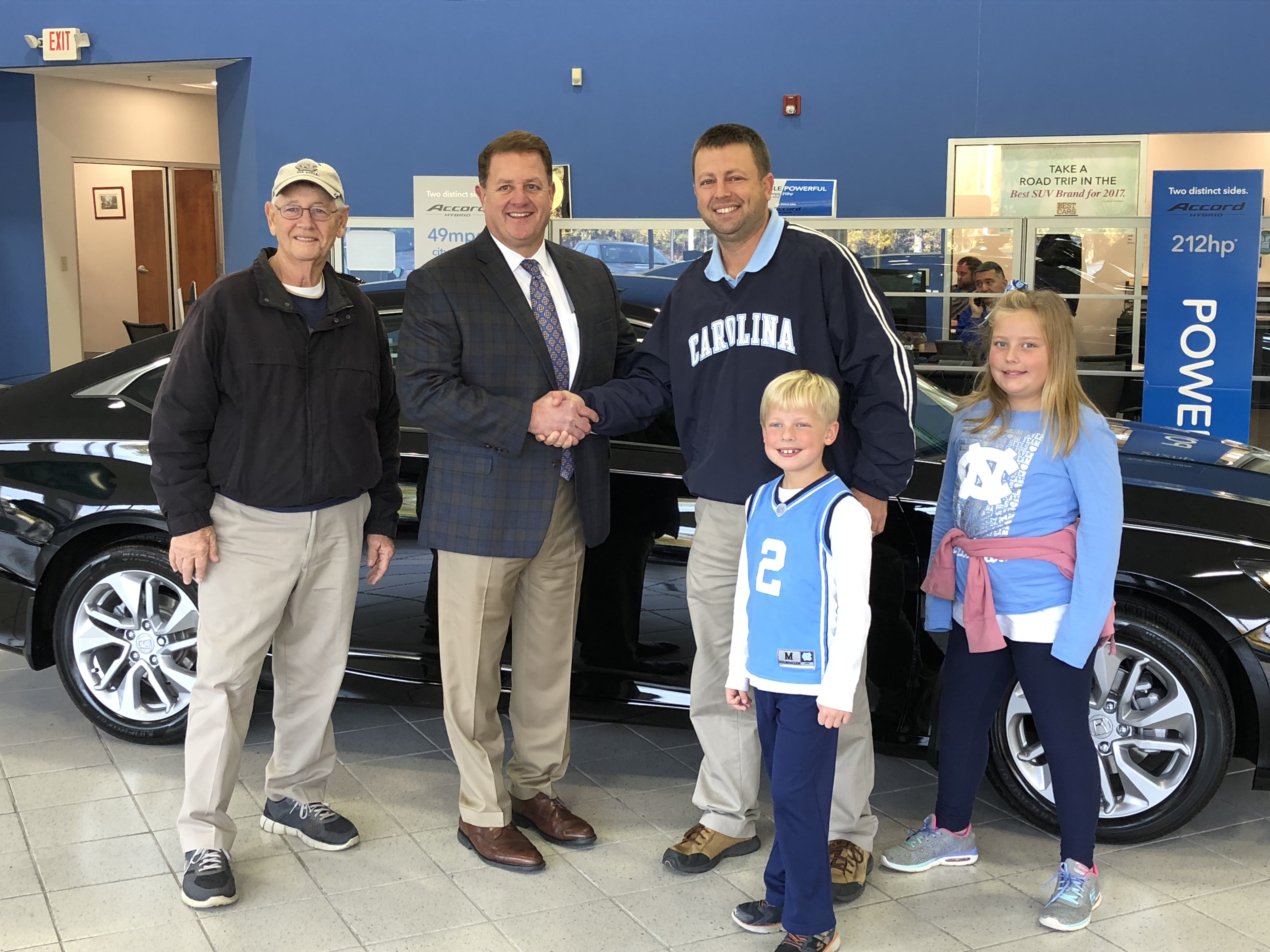 CHAPEL HILL, N.C. – Jason Stafford of Belmont, N.C. is receiving a brand-new 2018 Honda Accord following the Carolina Tar Heels’ win against the Pittsburgh Panthers on November 9 at Heinz Field.

Earlier in the football season, Stafford, a long-time Tar Heels’ fan, entered for a chance to win a 2017 Honda Accord at Crown Honda of Southpoint. Fans are encouraged to enter the Heels’ “Dash for a Car” promotion each week for the opportunity to win a brand-new car, given to one winner at random should the Tar Heels score a touchdown from a kickoff return at either the beginning of the first or second half when Carolina receives the ball. The Tar Heels ran this play successfully against Pitt, providing for one fan the opportunity of winning the 2017 Honda Accord. Stafford was the lucky recipient – marking the third car given away since the 2005 season. During Carolina’s 2016 football season, winners received new cars for the same promotion: Sept. 3 (vs. Georgia) and Nov. 20 (vs. Citadel).

“We’re very excited about giving away our third Honda in less than a year through the ‘Dash for a Car’ contest – a record number of giveaways within the two-season span,” said Crown Honda of Southpoint General Manager Scott Washle. “Our partnership with Tar Heel Sports Properties and the University of North Carolina continues to highlight the athletic achievements of UNC and reward loyal fans.”

“I would like to thank Crown Honda of Southpoint and Tar Heel Sports Properties for my new 2018 Honda Accord,” said Stafford. “As a current owner of a 2008 Honda Accord with over 175,000 miles on it, this is a much appreciated and needed gift for my family and me. I am a born and raised proud Tar Heel fan and plan to continue the Tar Heel traditions through my two young children as well.”

According to Chuck Schroeder, vice president and general manager for Learfield’s Tar Heel Sports Properties, “Scott and entire team at Crown Honda of Southpoint have been outstanding partners of ours for years, and we’re grateful for their dedicated support of the Carolina Tar Heels and their fanbase.”

Washle added, “We’re pleased to award the Stafford family with a brand new Honda. I encourage UNC fans to register on GoHeels.com to participate in this contest in hopes of being the next winner we would welcome into the Crown family.”

As multimedia rights holder for UNC Athletics, Tar Heel Sports Properties secured and manages the relationship with Crown Honda of Southpoint. An industry leader for more than four decades, Learfield has a deep presence in the college athletics landscape nationwide. In addition to UNC, it manages the multimedia and sponsorship rights for nearly 130 collegiate institutions, conferences and arenas, and supports athletic departments at all competitive levels as title sponsor of the prestigious Learfield Directors’ Cup. Learfield also provides its collegiate partners access to professional concessions and ticket sales; licensing and trademark consulting; digital platform expertise; and venue and technology systems through its affiliated companies.