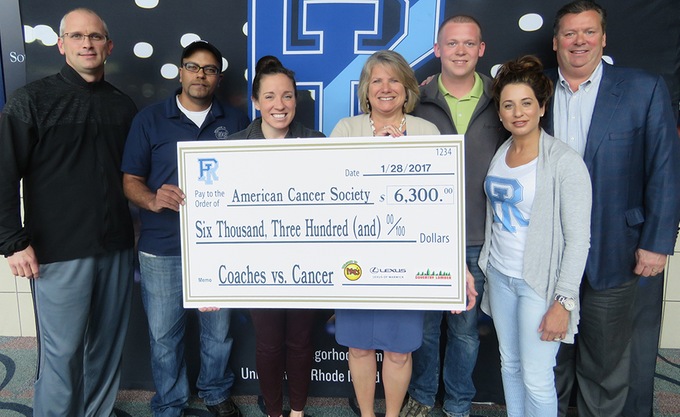 KINGSTON, R.I. – The University of Rhode Island Department of Athletics, Rhody Sports Properties, and three of its corporate partners – Coventry Lumber, Moe’s Southwest Grill and Lexus of Warwick – presented a check for $6,300 to the American Cancer Society and Coaches vs. Cancer in a recent check presentation event held at the Thomas M. Ryan Center. Through several different events and opportunities aimed at raising funds for the Coaches vs. Cancer and the ACS, these collaborative efforts raised nearly $2,300 more than the previous year.

“I can’t say enough about the unwavering support that Coach Dan Hurley and his wife, Andrea, provide to the American Cancer Society’s mission of saving more lives from cancer,” said Katy DiMare, senior manager for community events for American Cancer Society in New England. “On behalf of ACS, I thank them, URI Athletics and their generous partners for coming up with new and meaningful ways to raise money in the fight against cancer.”

Coventry Lumber hosted a brand-new initiative called “Every Free Throw Counts” during the 2016-17 men’s basketball season in order to deepen its community ties and alignment with the national Coaches vs. Cancer initiative. Coventry Lumber donated $25 for every URI free throw made, totaling $5,000 for the season.

“The fight against cancer is ongoing, and only years of research and development pave the way for progress to defeat this disease. Our involvement with Coaches vs. Cancer and URI is only a small part of the process, and we are proud to be a supporter of this worthwhile initiative,” added Bill Finnegan, owner of Coventry Lumber.

Additionally, Moe’s Southwest Grill designated a significant portion of all proceeds to Coaches vs. Cancer within a busy four-hour window on Friday, Jan. 27 – one day prior to the Rams’ annual “Suits and Sneakers” game on Jan. 28 vs. St. Bonaventure. At halftime of the matchup between the Rams and the Bonnies, Lexus of Warwick sponsored a “Five-Second Layup” promotion which helped garner funds and energize the crowd as one student took to the floor and won $1,000 – which Lexus matched in a donation to the ACS.

“We appreciate being able to work with URI Athletics and are overwhelmed by the tremendous effort the school and its partners put into our Coaches vs. Cancer initiative this year and in past years,” said Karen Healey, senior manager for community events for American Cancer Society in Rhode Island. “Our ACS Rhode Island office looks forward to continuing this relationship with our state’s flagship university, a connection that we hope continues to be beneficial for all those involved.”

Rhody Sports Properties is Learfield’s local team in Kingston. An industry leader for more than four decades, Learfield has a deep presence in the college athletics landscape nationwide. In addition to URI, it manages the multimedia and sponsorship rights for nearly 125 collegiate institutions, conferences and arenas, and supports athletic departments at all competitive levels as title sponsor of the prestigious Learfield Directors’ Cup.